A while back, our instructional leader, Debbie Collins, told a small group of coaches, “If we [instructional coaches] are doing our job well, we should be invisible.”

The statement begs the question, “What is visible that should not be visible?”

Debbie made this comment in a discussion about publicizing projects on which coaches had collaborated with teachers. On a surface level, I took this comment to mean that, when such projects are publicized, the coach should thoroughly remove his/her name from the credits so that the teacher and the work of the teacher holds the center stage.

The term “invisible,” though, was striking to me. To celebrate the success of a thing in which you have participated, but to do with such thorough humility that you could describe your influence as “invisible” to an outside audience is, I think, a significantly ego-less act. 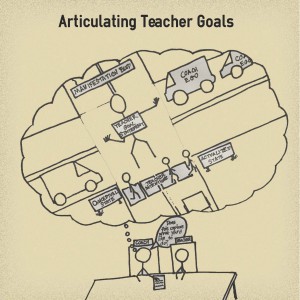 The desire to be credited for good work is, perhaps, a coarse manifestation of ego. There are, however, many subtle ways in which ego-driven habits have invaded my own work with teachers. For example, when I desire to share an idea, in part because it makes me sound smart, or when I desire to connect two people, in part because I am proud of my connections, some aspect of my ego becomes a visible – albeit sneaky – aspect of the project. Or on an even more subtle level, if I find myself pushing in a particular direction because what a teacher has said resonates with something I’ve read lately, or because it sounds to me like my work with another teacher, then here again I have fallen victim to coaching through the lens of my own ego.

The tools for disarming the ego and keeping the benefit of others in mind are often startlingly simple. I remember hearing John Hunter, of the World Peace Game phrase the question very deliberately, “Is there anything that anyone would like to share for the good of the group?” Though it may take some consciousness and discipline to answer that question with complete accuracy, this simple question is aimed at filtering out any habit of mind that might be founded in a self-serving attitude.

I find that the discipline of articulating a goal with a teacher is a similarly simple way to filter out the ego. When a teacher and I co-author a statement that begins, “Teacher will (verb phrase),” we’ve taken a simple but thorough step towards writing my self-centered influence out of the project. Every time I return to visit this statement with a teacher, I am reminded to check in: “Is this project developing in a way that is accurate to your vision? Are we honoring that which you hope to accomplish?” The more I adhere to this practice, the more my self-centered habits of mind (and the resultant manifestations of those habits) become “invisible.”

There is something clean and simple and beautiful about working in this way with a teacher. Those same self-centered habits of mind that manifest in one moment seem, in the very next moment, to produce feelings of confusion, uncertainty, and even unnecessary complexity. When these thoughts are absent from an interaction, I experience a pleasant feeling of openness.

Because I desire to work with teachers in such a way that, not only do we actualize the teacher’s goal, but also such that the teacher finds a similar feeling of peace in accomplishing this work, I strive to take the goal articulation a step further: “Teacher will (verb phrase)… so that students (verb phrase).” If a teacher can exercise discipline in returning to the question, “What is the benefit to students?” he/she might find a similar peace, built on this foundation of self-less work for the benefit of others.

Of course, it is not this simple! It’s rare to encounter the type of person, let alone coach, who can snap his or her fingers and send out waves of selflessness. The sharp edges of ego will snag these waves and create little eddies. If I am honest with myself, I think I can see that the first eddies begin closest to home. But when I see the eddies, I can put my attention there, and iron them out a bit. That’s why I love the discipline of the selfless goal: because it forces my attention to those snags in my own character that require ironing out so that the waves can go a little further. If we can purify our own minds enough, those waves might reach through teachers and on to students, and then who knows how far they might go!