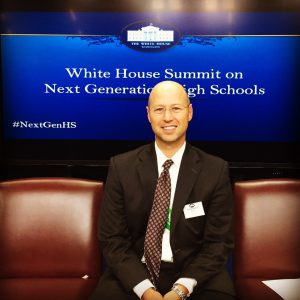 Chad Ratliff has been Principal of the Albemarle public lab school since 2017, previously serving as Director of Innovation and Instructional Programs for Albemarle County Public Schools. He is also a teacher in the upper school, facilitating a Dual Enrollment course in Entrepreneurship and the Theory of Knowledge course in the school’s International Baccalaureate (IB) Diploma Programme. The 6-12 school aims to foster creativity and intellectual curiosity through art and design, experiential learning, mastery, and student agency.  As an educational laboratory for research-based, student-centered learning, it also exists to design and pilot nontraditional approaches to learning that align to ACPS mission, vision, and goals with intent to inform practices more broadly.  Research partners have included MIT Teaching Systems Lab, U.Va. Curry School of Education, Princeton, Creativity Labs @ Indiana University, Maker Education Initiative, and Smithsonian.  He is Principal Investigator (PI) of the $3,500,000 U.S. Department of Education Investing in Innovation (i3) grant, Advanced Manufacturing and Engineering Design as Drivers of Cross-Curricular Change.

Chad is co-author of Timeless Learning: How Imagination, Observation, and Zero-Based Thinking Change Schools (Jossey-Bass, 2018). He also authored the Foreward, “On Liberating Teachers”, in University of Virginia Professor Patricia Jenning’s book Teacher Burnout Turnaround: Strategies for Empowered Educators (Norton, 2020).  In 2017, the National School Boards Association named him one of the “20 to Watch” educational leaders in the country. He was invited to several education-focused White House events during the Obama administration and has been called to testify before the Virginia General Assembly.  He was invited to speak in Singapore by the Ministry of Education in 2020 and has appeared before such organizations as the American Association of School Superintendents, U.S. Patent and Trademark Office, the National School Boards Association, and at World Maker Faire.  He has been an internal workshop presenter at U.S.DOE and National Science Foundation.  He was the keynote speaker at James Madison University’s annual Teaching and Learning with Technology Conference and the National Consortium for Entrepreneurship Education annual conference in 2016.

In 2015, Chad was appointed by Virginia Governor Terry McAuliffe to his State Council for Youth Entrepreneurship.  Between 2009-2015, he was a Virginia Board of Education appointee to the State Advisory Committee for Career and Technical Education and has served as the Board Chair for the Virginia Career Education Foundation.  In 2013, he was the facilitator for the High School of the Future Startup event for the Governor’s State STEM Summit.  Chad was named one the the “Top Leaders Under 40” by C-Ville Weekly and “Top 20 Under 40” by the Roanoke Times Blue Ridge Business Journal.  As a classroom teacher and coach for Martinsville City Public Schools, he was honored with the “Most Influential Educator” award three times and received “Wrestling Coach of the Year” honors seven times. He also received the Distinguished Alumni honor from Patrick Henry Community College.

An adjunct professor of entrepreneurship and founder, Chad is active in the entrepreneurial community and has organized several Startup Weekend events.  Born and raised in the foothills of the Blue Ridge Mountains, Chad holds an M.Ed. from the University of Virginia, an M.B.A. from Virginia Tech, a B.S. from Old Dominion University, and an A.A.S from Patrick Henry Community College.  He is also an alumnus of the University of Virginia’s Darden School of Business Executive Educators Leadership Institute.  When not working, he spends his time with his family, mountain biking, fishing, and traveling but most enjoys the times when they all coincide. 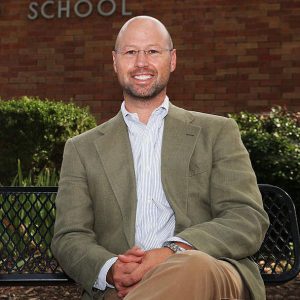